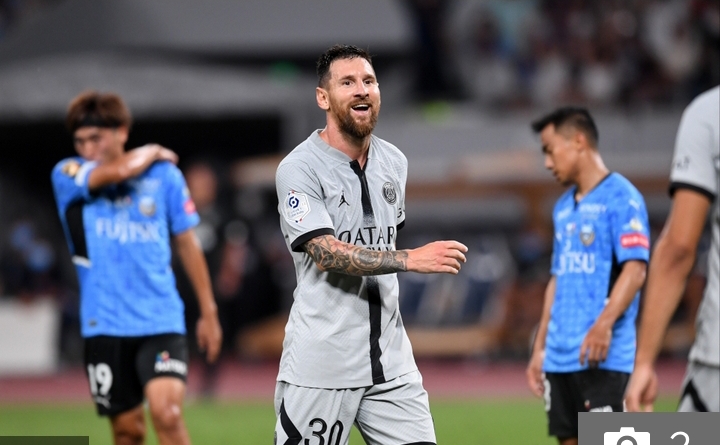 Lionel Messi scored in Paris Saint-Germain’s pre-season friendly victory – and as his side ran out 2-1 winners on Wednesday against Kawasaki Frontale.

The forward opened the scoring to give the French champions the lead at the Japan National Stadium, firing a low shot beyond the goalkeeper via a deflection.

Messi scored just 11 goals in all competitions for PSG last season but club president Nasser Al-Khelaifi said last month that in the 2022/23 season fans ‘will see the best version of Messi ever.’

The seven-time Ballon d’Or winner made his first pre-season appearance under new boss Christophe Galtier in a 2-0 victory over Quevilly on Friday.

His first goal, though, arrived on Wednesday when PSG kicked off their tour of Japan.

And it was only his 95th with his right foot and considering he has scored more than 700 goals in his career, that is quite something.

Messi, Kylian Mbappe and Neymar all started as PSG named an all-star line-up against their Japanese opponents.

Mbappe was involved in Messi’s goal when he cut inside from the left and clipped in a deep cross to Achraf Hakimi, who fired the ball back to the Argentina international.
He then struck the ball right-footed and his shot took a big deflection on its way into the net.

Substitute Arnaud Kalimuendo was also on the score sheet, before Kazuya Yamamura pulled one back for the home side late on.

It was, of course, Messi who stole the show with his first goal of pre-season.

He will be looking to help his side retain the Ligue 1 title next season and challenge for the Champions League once again.

PSG continue their tour of Japan with a clash against Gamba Osaka on July 25.