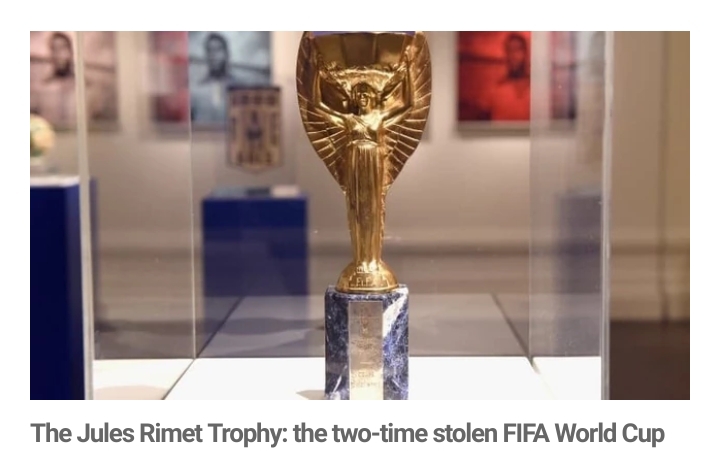 How the Fifa World cup was stolen in 1966

The Fifa world cup is the most prestigious trophy in football worth a whopping $20 million dollars.
Not many is aware that the trophy had been stolen twice on occasion.
It was first stolen in England in 1966 and Brazil in 1983.

The trophy was stolen on March 20, 1966, four months before the 1966 FIFA World Cup in England, during a public exhibition at Westminster Central Hall in London.

It was discovered seven days later, wrapped in newspaper, at the foot of a residential garden hedge on Beulah Hill in Upper Norwood, South London by a dog named Pickles.

The Trophy was taken to the host country of the ninth World Cup edition and was exhibited in the Central Hall Westminster. The only guard that was protecting it took a quick break and left his place to search for some coffee. Nevertheless, when he came back the statuette had disappeared.

London’s police started the research of the laurel but the hero was not meant to be a human: a dog named Pickles found the Trophy while he was taken out by David Corbett, his owner, for a walk. During the tour, Pickles began to snoop among the bushes of a private garden.

Corbett approached his dog as he noticed that it had found a package covered with newspaper. When he opened it, he found out that it was the coveted FIFA World Cup Trophy. Pickles owner received an important economic reward for his invaluable help to solve the case.

The second time the World cup was stolen was In 1970, when Brazil won the World Cup Trophy for the third consecutive time allowing them to keep the original Jules Rimet Trophy.
Then, the Jules Rimet Trophy was exhibited at the headquarters of the Brazilian Soccer Confederation (CBF) in Rio de Janeiro, where a local businessman named Sergio Peralta saw it and noticed that the security protocol to protect it was not strong enough.

Peralta built a plan to steal the statuette which included the participation of a jeweler and reducer: the chosen was the Argentinian Juan Carlos Hernandez and two more assistants. It was clear that the Brazilian businessman’s plan was sophisticated.

The gang stole the FIFA World Cup trophy after gagging the only security officer who was guarding it. Four suspects were tried and convicted in absentia for the crime.

The trophy has never been recovered, and it is widely believed to have been melted down and sold.

After the original trophy was won by Brazil in 1970, the replacement trophy was commissioned by FIFA for the 1974 World Cup.

FIFA originally had a rule stating that any team that wins the World Cup three times became permanent owners of the trophy.

However, currently, teams that win the World Cup don’t get to keep the prize, but are given a gold-plated replica to keep, which is called the FIFA World Cup Winners’ Trophy.
The Fifa world cup 2022 is around the corner to be hosted in Qatar, watch out this website for stories and updates.
Bookmark our site and always log on daily.

For daily soccer analysis and football predictions www.besoccer.co.uk is the place to be.